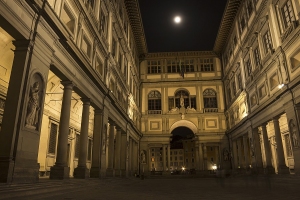 The Uffizi Gallery, with a collection of thousands of works of art, is today one of the most celebrated galleries in the world.
By the wishes of Francesco I (1541-1587) it was built on the second floor of Palazzo Uffizi; in the beginning, it gathered paintings, sculptures and tapestries from the Medici house, and later, it received numerous diplomatic donations and dynastic inheritances that increased the prestige of the Gallery and consecrated Florence as one of the world capitals of art.

Thanks to Anna Maria Luisa of the Medici's, the Uffizi Gallery became a place open to the public. The entrance is situated in the Uffizi square.

The Aula di San Pietro Scheraggio (Hall of Saint Peter Scherraggio, central nave which survived the destruction of the antique church, rich with decorations from the Roman and medieval époques, of among which include the remains of religious frescoes by Andrea del Castagno, is reached from the ticket office. On the ground floor, a well-stocked book shop offering a large selection of books and posters is available to visitors.

The grand stairway Scalone Vasariano is also accessed from the ticket office and leads to the first floor. Here we find the exposition and consultation halls of Gabinetto dei Disegni and Press (Design and Print rooms); a collection of designs of among which include the most important in the world, created by Lorenzo Medici and continued by his successors.
Artists like Michelangelo, Leonardo da Vinci, Vasari, and others, consulted these designs for their work. The library and space for temporary exhibitions are adjacent.

On the second floor find the Uffizi Gallery where paintings from the XIII to the XVIII century are distributed, but not lacking, are the sections dedicated to foreign artists ( German, Flemish, Dutch, and French) and an important collection of époque Roman sculpture (portraits, emperors, divinity).

The visit continues down the Vasariano corridor, constructed in 1565 by Vasari, which unites the Uffizi to Palazzo Vecchio and the Boboli Gardens. The corridor holds over 700 pieces of among which include the famous self-portraits of Andrea del Sarto and Marc Chagall.

At the end of 1998 the Donazione Contini Bonacossi ( Bonocossi Donation) which includes 35 paintings, 12 sculptures, antique furniture and majolica, one time property of Alessandro Contini Bonacassi, was transferred to the Uffizi Gallery. This collection is without doubt one of most important acquisitions of recent times by the Gallery