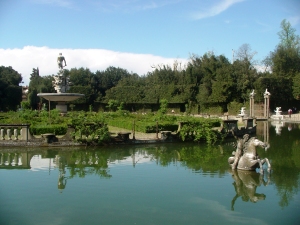 This spectacular garden begins from the hill behind Palazzo Pitti and extends towards Porta Romana; its beauty is due to various interventions throughout the ages.

The creation of the gardens began when Cosimo I of the Medici family and his wife Eleonora of Toledo purchased the land to build their new palace.
The architects who worked on the project were Giorgio Vasari (1554-1561), Bartolomeo Ammannati and Bernardo Buontalenti. But even in the 17th and 18th centuries, the Medici's and then the Lorena's enriched the gardens, which besides having beautiful pathways and woods, is also a real open air museum of sculpture.

The first phases of work reveal an ampfitheater decorated with antique sculptures, the Fountain of the Ocean sculpted by Giambologna, the little Grotta di Madama and the Grotta Grande, jewel of architectural and culture mannerisms, with internal and external stalactite decoration, even more animated with its play on water.

Other important things to see in the Boboli Gardens is the so called "del Forcone" or "Vivaio di Nettuno" fountain and the large statue of "Abbondanza" on the summit of the hill, initially begun by Giambologna to portray Giovanna d'Austria, wife of Francesco I, but finished in 1637 as an allegorical figure.

After the Prato dell'Uccellare or Bird Catching Lawn, going down towards Porta Romana, you will find the Viottolone or Large Path, long path lined with cypresses and statues leading up to the square of Isolotto, where in the center you can see the large fountain of Ocean by Giambologna surrounded by another 3 sculptures depicting the Nile, Ganges and Euphrates rivers.

The Coffeehouse, Lemon house, and Palazzina of the Meridiana were all done in the 1700's during the Lorraine époque. In 1789, in the center of the Amphitheater, an Egyptian obelisk, originally from Luxor, was erected.